A photo of The Victors. This one I believe was one of a series of publicity photos from the early sixties. The full set consisted of single photos of each group member and this group photo. I have no idea where the rest of the photos went as this is the only one I can find. 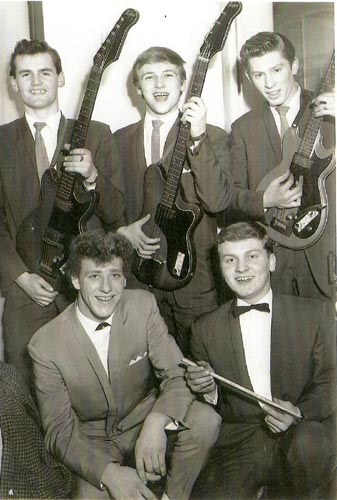 the guy half seen on the left with a Hofner is Stuart (Stu) Wade, the Bass player was Ray Allot, and though I can't quite tell from the photo at the time they got the Hofners the lead guitarist would have been Greg Hants. The drummer's name I forget but the singer could have been Dave Bradley
info supplied by John Welsby 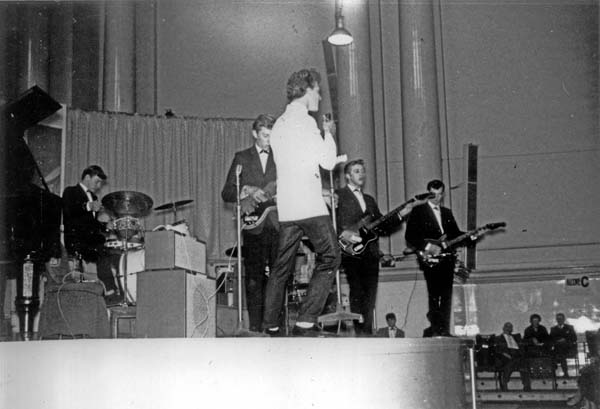 With reference to The Victors featured on Roll back the Years, the drummer is Pete Ladley who was with the group from 1961 till 1966. Pete is an old mate of mine from childhood days and I can remember going to see the Victors at various venues around Wakefield area where they were based.

The singer was I believe called Ken, having replaced their previous singer called Brad.
Brad wore a black leather glove on one hand, whether this was a tribute to Gene Vincent or Vince Taylor , who knows?. The rest of the group is named correctly.They all worked at Church's Heating engineers in Wakefield. I recently saw a video of Wakefield legend Frank Hepworth (Heppy) recorded at Heppys Club back in the 70/80's with Ray playing bass and singing.

The venue in the picture was I believe Leeds Town Hall, I vaguely remember The Victors entering a talent contest at the town hall.