A spin-off from the Peppers was Ian Smith's band(s) the Inner Mind and the Tender Touch. Ian joined the original band on keyboards, and then when they disbanded he and Gaff carried on playing reggae with the Inner Mind and Neil Sedaka style pop with the Tender Touch...they used two names to try and avoid the two different audiences turning up to the wrong gigs and being disappointed. A lot later I ran into Teddy Platt who was the guitarist with the Peppers. I was in the house band at Cesar's Palace at the time...(a bit like Batley Variety Club in between Luton and Dunstable). Ted came a couple of times doing the MD for Freddy Starr and I played 2nd guitar...that would have been around 1978.
Information supplied by Pete Sewell

I was doing a bit of research into old acquaintances and came across your site.
I was roadie for the Inner Mind (post Peppers) between 1967 and 1970.
The photo was a publicity shot taken in Dewsbury in 1968 when the lead guitarist was sick. Hence I stood in (the best looking one on the right). 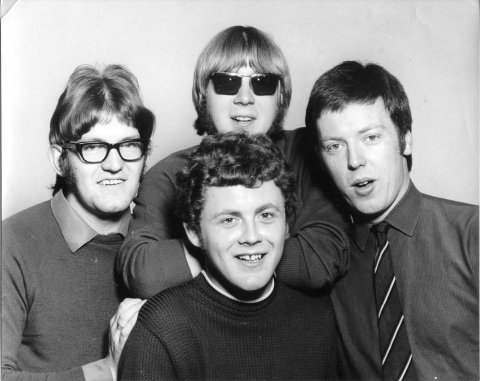 The actual band members are Dave 'Gaff' Tattersall Bass (left); Nick 'Mo' Marsh Drums (back) and Ian 'Miff' Smith Organ & Vocals (front).
The missing band member at the time was Steve (Rocker) Blakeley (lead/rhythm guitar).
Sadly Rocker is no longer with us having died of MS in April 2001 in Brisbane Australia, the picture of him in the Cobra is the last one taken of him before he died. He too was an excellent musician. If you can include his picture on your site it will be a fitting tribute to him and many of his contemporaries who will remember his days in the band.

The 'Mind' were brilliant in their time. Sadly we parted company in 1969 when the the line up split and I sided with the departing faction.