Dave Plumb and the Stones 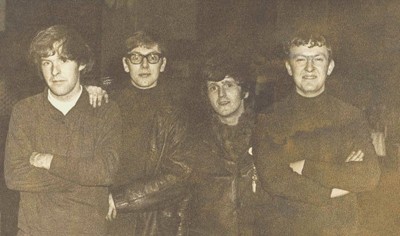 I do have some info on groups around in what I call the Golden Era. early '60s to early '70s. I started playing in 1960 and packed in 1973. I then took ten years in the normal world and started again in '83. Still playing today..

After "Move It" came out, everyone, me included, wanted to be like Cliff & the Shadows. The majority of bands were enthusiastic but lacked talent and presentation. Some didn't last very long, others consisting of the usual lead, rhythm, bass & drums lasted quite a time by playing resident in pubs for pin money. I played nearly every night for around a year in a pub called The Queens Hotel, on George St in Ashton-u-Lyne. Because most pubs wanted a piece of the action there were plenty of venues. Some we enjoyed some we didn't, I can remember some but I'll not bore you with names and places.
After the first couple of years I was playing in bands with enough talent to impress. One band was Dave Plumb & the Stones. Formed around late '62 early '63. The band consisted of Dave Plumb on vocals, Ralph-de-Berry (Chunky) on lead, Andy Lynch on drums and Rodger on rhythm, no bass player. I joined in '64 as the bass player, replacing Rodger. We had a decent following of fans, what band didn't? As Dave lived in Stretford most of the bookings were centred there. Ralph lived off Brooklands Rd. in Sale and Andy from Benchill in Wythenshawe. I was in Ashton-u-Lyne. We covered a fair amount of material while we were together, standard songs that Ralph rearranged to be that bit different, plus a few that Ralph had written. I do have an old recording of the band covering GLORIA the "Them" number. I also have some photos taken at Sale Locarno messing about.

In early '66 we went to London and auditioned for a contract playing on the continent, exactly where escapes me, (it was nearly 40yrs ago,) we passed with flying colours and asked for a copy of the contract. After looking through it and talking to the "Black Abbotts" or was it the "Rocking Vicars"? they had just returned from a similar tour, we decided not to do it. Did we make the right choice? Water under the bridge now so it don't matter as we decided to disband in mid '66.

Dave I lost touch with after the band split, Ralph I did try to contact on numerous occasions, his mother said, "He moves around a lot with his job," rumour has it he was working for Decca, married
and moved south. I wish I could contact him; he was a good mate and superb guitarist.
Andy started playing with a Droylsden group "The Factotums," they made a record or two with moderate success, and, for a short time, Jimmy Page of Zeppelin fame played with them. That I can confirm via a CD released by Page with the Factotums on it. I bumped into Andy a few years ago, living local to me in Stalybridge; he was at the time driving for a living and didn't play at all. This week I've dug about and managed to get his surname, now I should be able to find him. (Watch this space)
I'm still playing, now with an Irish band called "Whiskey in the Jar", there's a reasonable amount of work but don't have the get up and go at a minutes' notice I used to have.,

Other passable bands I played with? Beatvendors in early '60s. I have some photos taken at the Top Twenty or Ten Club above Droylsden Co-op,
with Barrie Collins and Ray Terret, also some taken at Beat City in Manchester for a lager promotion, and, photos of the obligatory Bedford van plus an ambulance we used to get about. Ah happy days.

After Dave Plumb I joined a trio from Stockport, who with the lead player Ken Shelmadine, called themselves The Rangers, who then became the
Klyx, they in turn became Pyawacket. who disbanded in '73. From late '66 to '73 with one band different names and different lads. One of the first giggs we did under the "Klyx" was supporting "The Move" in Jimmy Saville's Top Ten club at Belle Vue. Their hit "Night of Fear" had just started climbing the charts. Now they were what you call a competent pro' band, superb harmonies, very impressive.
The '60s and early '70s was a tremendous time to play in bands, music changed so fast, if you sat down you were left behind. From '67 to '73 we covered Tamala, Beachboys, Four Season's,
C,S,N, (I sang the high bits), Yes at the Fragile/Time & a Word era, and later the usual Zeppelin and Purple numbers.
Me and Ken played through all the different line ups. He was an excellent musician both in practice and in his theory. I don't have much on tape
from that era but, we did lay down a few tracks for the
BBC at Maida Vale studios in London. Umm I wonder?.

home | roll back the years